This Is A Good Day

You know how it is when you have a list of things you hope to accomplish and at the same time you're doubtful that you'll actually get them done... and then you do... and it's amazing. Wednesday was like that. Everything I'd talked about doing in my journal that morning was at just the point I'd hoped it would be by the time I went to bed that night. THIS is a good day. 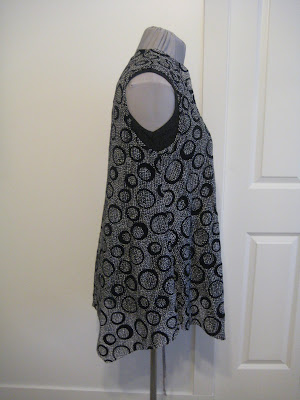 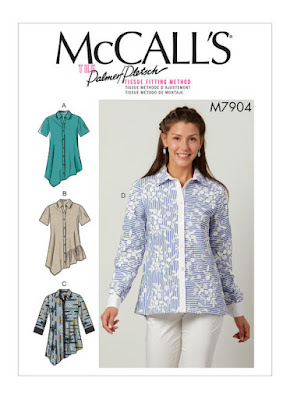 With my stash so freshly cleaned out, the choice of fabrics I was willing to sacrifice to a possibly unwearable muslin were slim to one - this black sheer with irregular white dots and flocked circles. I wanted to test a shoulder alteration on McCall's 7904 before sewing a "real" version with the flounces so I decided to make a sleeveless sample. And then I decided not to.

It would have had two points in the front by mirroring the right front instead of cutting the left and right pieces separately only when I got to this stage, I realized that the underarm was way too low plus I wasn't feeling the whole sheer thing. I layer when I want to but I don't like to have to and - just to add a little more justification - it was not a pretty feeling polyester. I originally bought it on sale for a very full A-line skirt with godets. The remainder may still become a less full skirt with a lining. 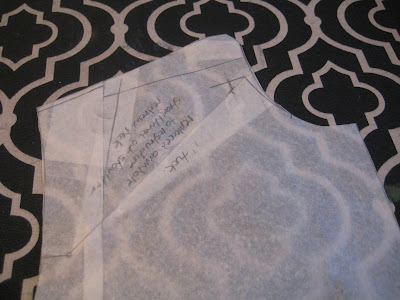 I started working on this adjustment when the furrow that formed from my neck point to my armhole was driving me crazy. I knew I'd have to figure it out if I wanted to sew more blouses or woven garments that wouldn't hide it as much as knits. When I pinned the wrinkle out, the tuck started high on the neck near where the shoulder seam meets the neckline and angled diagonally. At the widest point, it was 1" tapered to nothing. After taking out the tuck on the pattern piece, I added back to the shoulder seam to re-true it. Above, you can see what that looks like on paper.

You might ask what really changed. I know. I do that often. In this case, it took out some of the extra fabric across the shoulder and altered the shape of the neckline. This is the second time I've tried this adjustment and so far, the shoulder fit is vastly improved. I originally thought I'd be making the adjustment to my right shoulder only and would forever on have to cut out separate front pieces. Thankfully, when I tried that first garment on inside out, the adjustment worked on both shoulders. YES YES
Based on the muslin, I need to raise the underarm point about 1" and I would guess that adjustment needs to be done before the tuck. I'll test that assumption on the version with the flounces probably in a lightweight linen that would be more forgiving than a crisp cotton if I'm wrong. 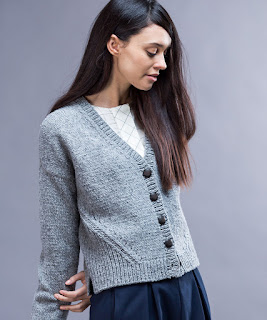 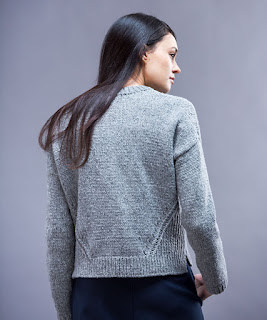 Quite a while ago, I started this cardigan - Truss - only the numbers weren't working out on the set-up row after joining the ribbed bands. I tried it quite a few times and finally wrote the company to say that I knew I was missing something but I couldn't figure out what. The sweet woman who wrote me back told me so gently that I was following the wrong size instructions that it actually took me a few reads to figure out what she was saying. In-between, I had started another project so I put this one on hold until I finished that one and got back to it Wednesday. 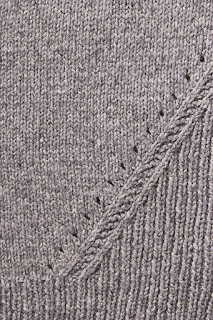 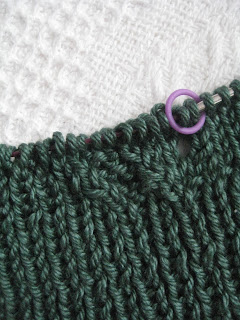 The yarn I'm using is a discontinued merino wool and silk blend. I'm knitting the size I (barely) have enough yarn for and hoping I don't run out. The detail at left is from the pattern. The one at right is my start. The chart is in teeny tiny font, seventy-one stitches wide and fifty-six rows high. I'm on row four and starting to see how it flows so hopefully it won't be as fussy as I thought it would be. 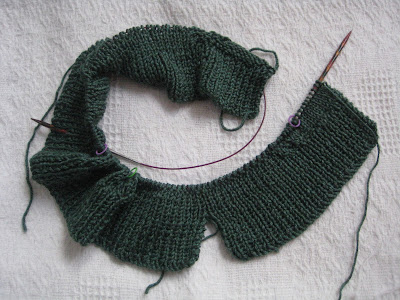 To start, you separately knit the three bottom bands for the left and right fronts and the back and then join them together leaving small side slits. I really like the way that looks. 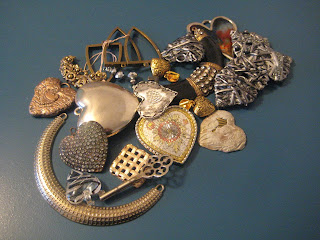 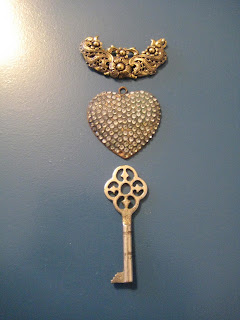 AND... the other thing I wanted to get started was a necklace to go with my Valentine's Day outfit. I pulled all the possible bits & pieces out of my stash, from the two jars labelled Found Objects, and then selected the three pieces at right to work with. The working title is the key to my heart. I'll experiment with small textile beads made out of the heart fabric I used for the pants - yet to be blogged about - and see if they fit in somewhere.

What makes for a good creative day for you?
Talk soon - Myrna