Before I returned to sewing fashions, I created textile art which I described as contemporary abstract paintings made out of fabric to avoid any bed-quilt-ish overtone since they were for walls not beds and nothing at all like traditional quilts. The pieces were mounted on gallery wrapped canvases with hanging wire on the back so they could be easily displayed. Hammer, nail, hung, and done. I found that potential buyers could better relate to fabric as art when it was displayed in that manner and better relating led to higher sales.

After working hard for years to get my work into high end galleries, things were going quite well and I was enjoying growing success and then, the recession happened. Life got really tough for so many people and high end, abstract, alternative art just wasn't in demand. At the same time, my teaching income dropped off considerably with less students able to afford workshops. In the first quarter of 2009, it was down 70% and I had to make a decision.

As well received as my work was, this was my job. I needed the pieces to sell and unless they did, without my teaching income to carry the costs, I couldn't afford to keep producing more. Textile art is not a cheap "sport" and a business that makes money is a success and a business that does not is not. It had nothing to do with how good I was or how hard I worked. It was simply the bottom line. 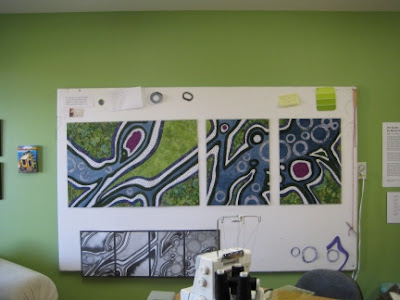 This piece in progress was made in 2009 for my last solo exhibit held in January 2010. The piece didn't sell and eventually I dismantled it from the canvas and put the three sections in my bits & pieces of potential box where it stayed until this week. The box contains things I want to maximize. With its layered surface and extensive threadwork, I didn't want this one to go to waste and since I really enjoy the journey of turning something that isn't working into something that could, I decided to cut it up and make a bag for an upcoming trip. It is almost finished so you'll see it soon.

While I was working, what struck me as interesting is some of the contradictions that artists like myself live with. This week, I've watched several year end videos in which the presenter talks about all their makes for this year. The one that totally stunned me was a woman who sewed 95 garments this year which was lower than her 125 from last year only she'd moved and renovated so only had seven months to sew instead of twelve.

I have less than fifty garments in my entire wardrobe and most are more than a year old, multi-seasonal, and worn layered. Ninety-five garments is more than my mind can comprehend never mind 95 plus 125 plus whatever she'd made before that. It struck me as the sewing equivalent of fast fashion. One person just can't wear that many garments very often and it's not in my minimalist nature to even try. I'm uncomfortable with any kind of excess however, as a maker, making things is how I operate and it can be a tough juggle to blend making and minimalism with gratefulness and respect both for the earth and for finances. I'm glad that I'm drawn to labour intensive work because it puts a built in limit on how much I can produce. 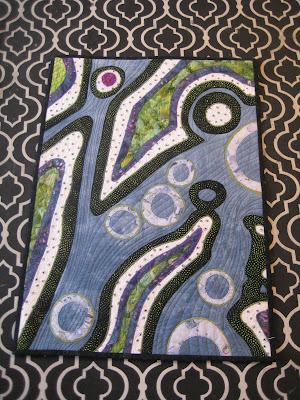 Another way is by maximizing the potential of what I have. I won't say it never happens but it's very infrequent that I actually throw something out. I might donate it or give it away but most likely if I still like the fabric and how it behaved, I'll unravel the knitting or cut up the sewing and give it new life like I did this piece. How is it though... 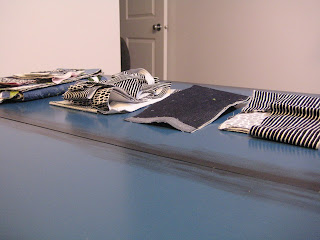 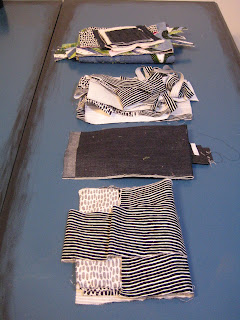 ... that refashioning one textile piece leads to so many scraps? I swear they breed in the night. With the exception of the purse foam, every part of the new bag has come from remnants that were already in stash only they were large remnants like one piece of denim, one piece of black and white stripe, one piece of black and white dots, and the textile art to be recycled. Above is what's now left over.  A pile of fabric with either interfacing or fusible web on the back. A pile of denim that is either fused, interfaced, or quilted. A pile of smaller black and white scraps with no interfacing or fusing. And, smaller pieces of the original textile art.

Even condensed into a large zip bag, these scraps are bigger, fatter, and more in number that what I started with. They are now bits & pieces of potential that will get utilized at some point... or donated. Several years ago, on a different project, I tried to continue sewing with my piles in an attempt to use up the fabric entirely and I couldn't do it. Each successive make called in some new bits and pieces and the pile never seemed to shrink. Eventually, I packaged it up and took it to the thrift store. 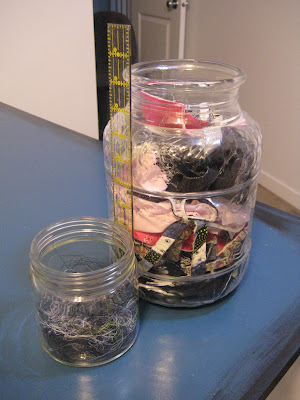 There are two steps left and the bag will be finished so there may be a couple more thread ends but no more fabric scraps. I put the ruler between the jars in the above picture so you'd get an idea of how much was in them. The smaller jar at left is the stop and start threads from sewing. It sits by my sewing machine. The bigger jar at right sits on my work island and collects the actual garbage from each project. The contents of both are ONLY from this bag project. I will add the threads to a larger jar and use them at some point to make lace. For the fabric scraps, even though I know that some people could find a use for these, I am not that woman and they will go in the garbage.

And everything else, those four piles, has potential which is how I balance being a minimalist maximizing maker.

The follow by email option on Blogger has been discontinued. Right now, Bloglovin is the only option here. I'm looking into what else could work.