I Knocked Out A Wall

When I purchased this townhouse just over a year ago, I was doing a minimal amount of metalwork and set up a workbench in the garage for the occasional piece. At that point, working with polymer clay was nowhere on the horizon and now that it is, I'm spending a lot more time exploring beads, buttons, and jewelry. That led to the - surprisingly difficult - search for a designated jewelry space somewhere in my house that would function both physically and emotionally. This latest set-up is my sixth attempt. 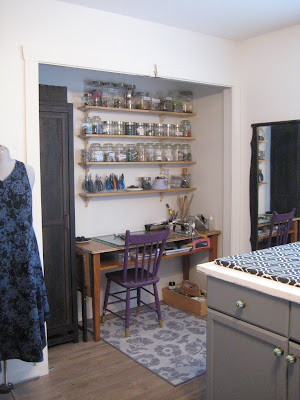 My textile studio is in the largest bedroom with plenty of space, fabulous light, and the sound of the creek. I tried two times to add the jewelry station and with both layouts, it didn't work. The room was too crowded. And then... a thought. The closet had one continuous space on the inside with two doors on the outside and a post in the middle that was a complete pain to work around since it was directly in front of one of my fabric shelves. What if...? 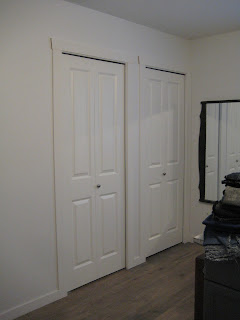 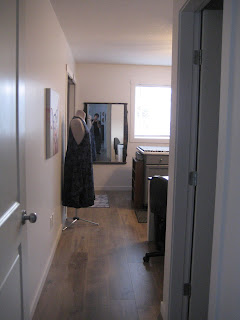 On Thursday, I removed the doors, knocked out the wall, opened up the space, and set up the jewelry station in the closet. This allows the chair to push back into the "hallway" that needed to remain open from the entry, past the washroom, and in front of the closet and was causing the main issue with all the furniture crowded to the right and this left side underutilized. I wish I had thought of this before the new flooring was put in however... 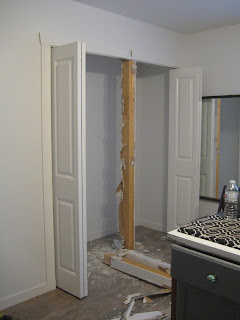 ... I'll have my contractor repair both the floor and the cased opening and all will be well. I plan to leave the doors off as I intend to be in this home/studio for quite a while. When I'm old and grey and dragged away kicking and screaming, the next owner can put doors back on if they want. 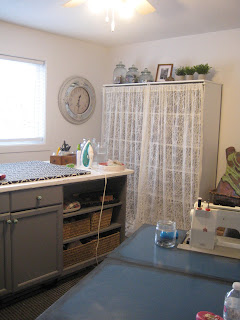 These shelving units were in my previous studio and had doors since I prefer closed storage. When they were installed in the closet, I gave away the doors. Sigh. I've added these lace curtains. They were in a closet opening in my previous studio so I'm used to them and know it'll work for now. Once I decide if the set up is staying, I'll figure out how many, of what kind of storage unit, I would like. Ikea has some currently out-of-stock units I may get at some point however, with supply chains and delivery services struggling, this is good and enough for now. 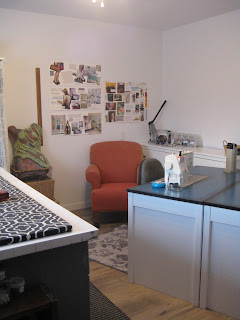 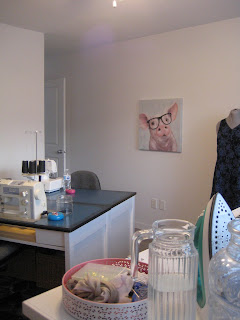 I require a fair amount of open space. When there is too much clutter on surfaces and not enough room to move freely, my brain gets jittery and I can't think well and have trouble working. Moving the jewelry station into the closet has made all the difference. The studio no longer feels crowded. One of the things I really didn't want to lose was this orange curl-up chair and it still fits. YES! I bought it for $25 at the thrift store where it was labelled red chair. Hmm ? Definitely orange. It has casters on the bottom and moves away easily when I want into the infrequently opened drawers. 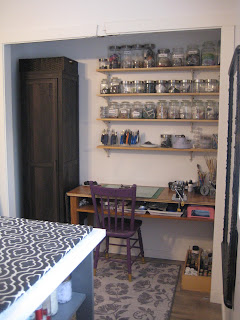 Here's another look at the jewelry station. I was hopeful that I'd like that storage cupboard and could get two wider ones for fabric only it's not quite right. While I like the way it looks and that it can be painted, I don't like how it functions. The inside space is wider than the opening so any boxes are tucked around a corner and won't slide out smoothly. There are only three shelves plus the bottom. One shelf is fixed and the others are only adjustable by three holes instead of fully adjustable to allow for more shelves and for shorter or taller containers. I won't get another one. Down the line when (she says again) I am positive the jewelry station is staying here - which I'm 99.9% sure it is - I will make a wall-to-wall work surface with storage above and below and move this unit somewhere else. 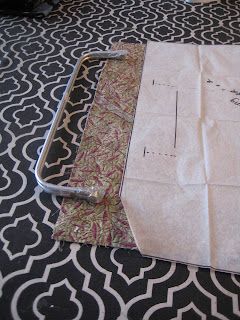 On Saturday, I worked at the jewelry station for a bit making some beads and then started a bag project refashioning a textile piece from my last exhibit in 2010. It's hard to believe it was twelve years ago this month. It's time to give this piece new life. I was able to think through the steps clearly and enjoyed working in a much less crowded space. Both the jewelry station and the main area functioned fabulously. After evaluating differing functions and options between the two platforms - that I wish I'd known before I tried shifting - the blog will be staying here - at Blogger - with this name. I think that's best.
Talk soon - Myrna Grateful - a jewelry station that just might stay the course!
at January 10, 2022

Email ThisBlogThis!Share to TwitterShare to FacebookShare to Pinterest
Labels: Studio

The follow by email option on Blogger has been discontinued. Right now, Bloglovin is the only option here. I'm looking into what else could work.