That Thing We're Afraid To Do

Sewing is not world peace, just to be clear. That thing that we're afraid to do is not going to alter the state of the universe if we try and fail, unless of course we're talking about our own universe. There it could be life altering... or at least sewing altering.
I remember years and years ago when I hired someone to do my zippers and buttonholes. To be fair, the machine I had at the time did not have a good buttonholer but I certainly wasn't in a rush to get one until the day I decided this was ridiculous, started making a bunch of buttonholes, learned how to reverse a bad buttonhole, and practiced until it was no big deal. I learned to do by doing which is exactly what I preach, sometimes at myself.

I eventually decided to get over zippers. With basting tape, the right foot, and practice, I've conquered them too... even the invisible ones... which turned out to be my favourite. Each time I learn a new technique to the point that it flows smoothly, it's another tool in my toolbox, both design-wise and technique-wise, and having more tools creates more opportunities. Which leaves welts. 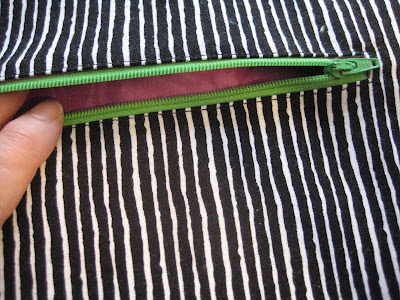 I've been practicing zippered welt pockets for a while and I was thrilled yesterday when it flowed with ease and took less than five minutes tops. I didn't have to watch a video and follow along. I knew what to do, I did it, and I ended up with a nicely zipped pocket. AND what's really fun about this zipper is that it's cloth with metal teeth and a metal zipper pull. It's been in my stash not just for years but literally for decades... from the eighties. I'd obviously tried using it once before since it had been shortened from the original length but this is the first time it's been sewn in and it's staying. YES YES! 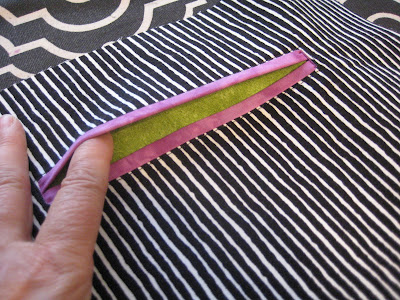 I know I made a single welt pocket on the tailored suit coat in my grade twelve sewing course and then again on a rain coat and a winter coat a few years ago but this is, in all likelihood, the first time I've made a double welt pocket. I didn't have to follow along with the computer right next to me but I did watch a few videos first and then try one of the techniques. I'll try another one next time. 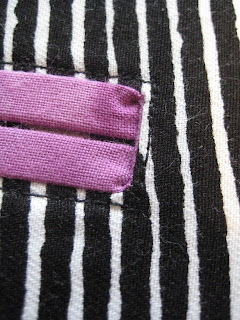 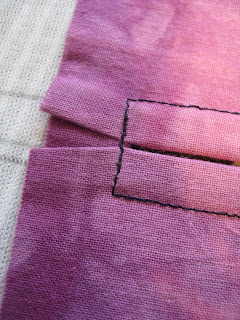 The puckers look way worse in this image than they do in person. It's not the shape of the opening; it's the lips. I should have pulled the fabric tighter around so there wasn't any extra fabric to wrinkle. If this was on the back of my pants, I'd fix it but it's not. It's the inside pocket of a bag and for that - and seeing it's my first time - this is good and enough. I plan to use this as a class sample and I think it's fabulous when my students can see my own learning curve and know we all start somewhere. 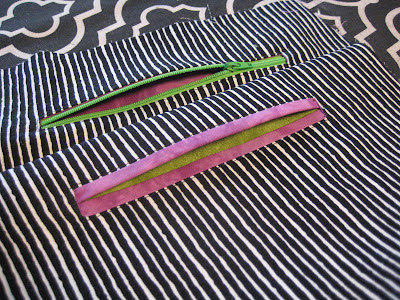 I know all the lengths I've gone to in the past to avoid sewing a welt pocket - with or without a zipper - and some of them are useful methods that I won't be discarding now however, being able to add these to my repertoire and to continue to improve with practice is a good thing. When there's something I'm hesitant to do, I find that I need to take a measure of whether to push now or wait and more often than not I simply need to wait because once it registers that I want to do something and I'm avoiding it, it's only a matter of time until enough desire rises to the surface and the time becomes right. 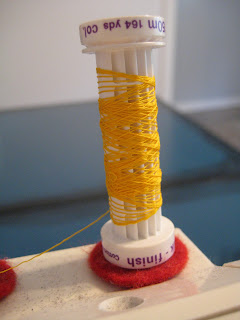 I cut the exterior of the bag from the same textile art piece that I cut the collage from in the last post. Not all of the fused shapes had been stitched around so yesterday I was finishing them and experiencing more rayon thread spools that were too old and snapping. It was discouraging. They represent an investment I thought would go forward and feel like wasted money even though I'm keeping the threads to make lace... but that's a lot of lace... so I'm not sure if it'll actually happen. For now, it's pretty thread in a jar BUT...

... thankfully, this spool is not rayon thread, wasn't too old, and didn't snap. I was able to stitch up the entire spool and that was a good feeling, a welcome good feeling. I started this project on a really bad day when I knew stitching would be beneficial but it can be hard to actually start when sitting under a big grey cloud emotionally and literally. 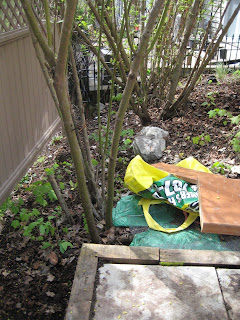 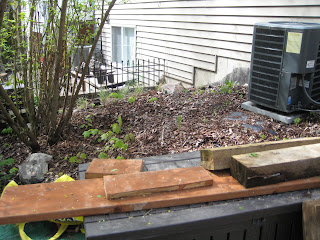 I can't believe how cold and grey it is this year compared to previous ones. I had some time between rain showers to work in the yard on Monday and started at this end. I don't have a basement and my ground is higher than the neighbour's who does have one so there is a brick retaining wall between us on her side. I started by raking out this area and seeing what was underneath all the bark chips and then... 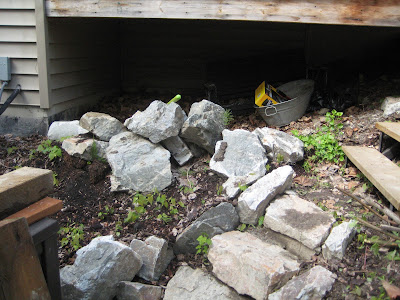 ... moved these rocks that the contractor had piled up last fall when he was building the stairs. A few I could lift, most I rolled, and created a... 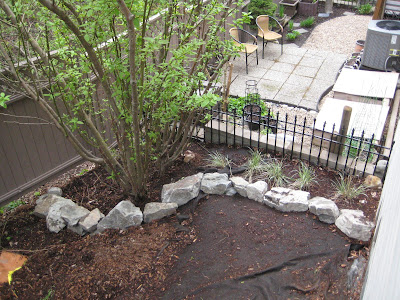 ... lovely edge. The brown fence is between the property and a walking path along the creek which is very close, maybe six feet away at most, so I have a natural water feature with the sound. Too many people use the path to take down the fence and see the creek at this level. I can see it from the upper deck where I took the picture from.

This tree has not been well tended. There are a lot of suckers that need to be pruned back and cleaned up. I'll do that, leave it for this year, and see how it does before deciding to replace it or not. I'll also shovel some of the bark mulch back around its base and in-between the decorative grasses to help with moisture retention.

I plan to work across the yard from side to side creating the shapes and levels that work with the land before deciding what size the extended deck will be. I have a LOT of experience working with rocks so while the yard is new, I'm pulling familiar techniques out of my tool box and very happy with this beginning.