My style of journaling is more of a guided study than a diary. I work through three books, one at a time, reading a section, taking notes about what impacts me, and then reflecting on them before moving on to the next book. The first is a daily inspirational reading which always takes 365 days because it's organized by the day and year. The second is a creative study and the third is a personal growth study. Those two books start and end whenever they start and end. I've been journal writing for close to thirty years and this week was the first time that those two books ended on exactly the same morning. How fun is that. I've decided to see it as a good sign.

My new creative study is called Create: What To Do When You Don't Know What To Do. I bought it at the bookstore in Ashland, Oregon when I was at the retreat in March and hopefully it will be as good as some of the other books I've bought there (edit: May 16, 2022 - it's not. I don't recommend it). In today's section, the author writes we're on the right road - or at least the road we're on is the road we're on...

This echoes a thought I've been pondering a lot over the last few months, that perhaps it's not so much about finding the right road as it is about acknowledging we're on the road we're on and we have the opportunity to explore it to the best of our ability. Life does its twisty-turny thing and goes in directions we hadn't anticipated and yet we still have the choice to act purposefully, to choose toward our best life.

Part of my prayer for ever increasing holistic health over the past several years has been that God will reveal the path before me, highlight the signposts, close tight the doors I am not meant to walk through, and swing wide the ones that are for me. I see that happening. As I was working in the yard this week, I realized that the path before me may look very similar to the path behind me with some adjustments - the same done differently - and that does not make it the wrong path. That just makes it similar with adjustments. 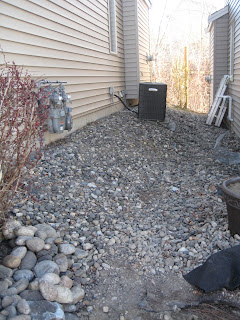 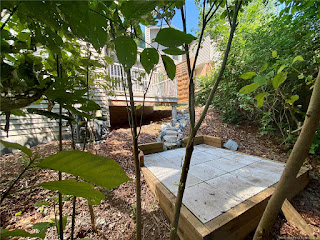 When I bought my townhouse in September 2020, one of the selling features was supposed to be the professionally landscaped back yard. My first thought was I can do better than that and my second that the budget must have been ridiculously tight. I heard that the previous owner only had this work done to sell the unit because of the way the pandemic had encouraged outdoor living.

The side walk above left actually has a row of stepping stones however, they are the same colour as the rocks and were placed on a slope with round rocks surrounding them and became hidden. I had no idea there were so many until I started shifting the rocks which were incredibly dangerous to walk on... being round... and rolling... on a slope. The back yard looked ludicrous IMHO with a miniscule deck, a narrow dangerous walkway, and bark mulch covering weeds. When the landscapers cut down the trees to make room for the deck, they shoved the branches into the neighbour's trees and now they are drying out and becoming kindling. 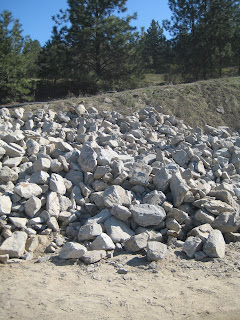 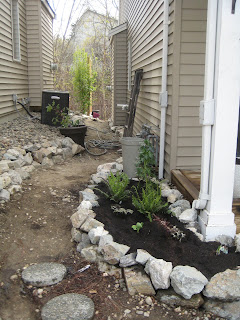 Last spring, I made numerous trips to a rock quarry about forty minutes away and brought back tons of rocks that I moved a minimum of three times - into the car, out of the car, and onto the path. By the end, the guys were starting to call me by name and tease me and I know they're expecting me back soon and I do need to go back. I created a flat pathway from the front of the house to the back with a garden bed near the porch and then planted the path with micro-clover which was supposed to be the most amazing ground cover ever except... 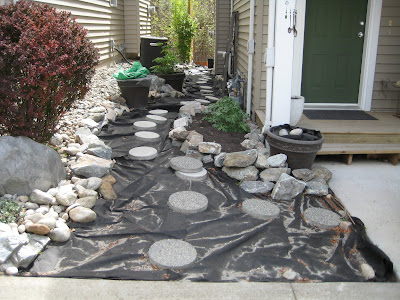 ... it didn't perform as advertised and ended up being way more work than I wanted so last fall, I dug out the top layer of dirt with the clover and moved it to another location where, if the clover survives, I won't need to trim it all the time and then covered the walkway with landscape cloth and the stepping stones to keep it in place and waited out the winter. 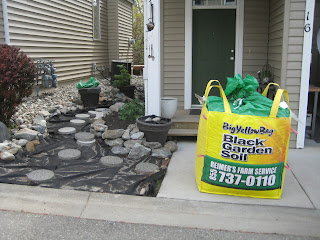 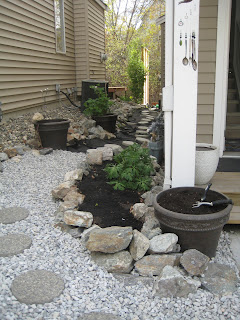 On Tuesday, I spent two hours shoveling rock out of the bag and onto the ground and got from the street to the first curve with five stepping stones in place. I'm using the rest in another location so the remainder of the side walk will be just gravel. 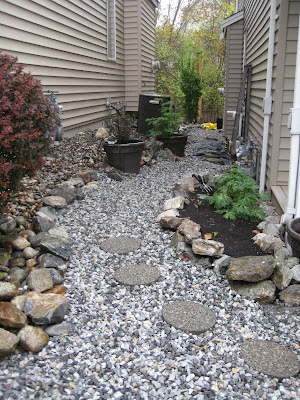 I spent another two hours on Wednesday, emptied the bag, and finished all the edges and the full width at the back. For the section by the ladder, I need to get some more larger rocks to create a space between the walk and the house so the gravel is not up against the siding. Back to the quarry. Thursday morning, another bag of rocks was delivered and is waiting on the driveway.  The path is the same done differently. 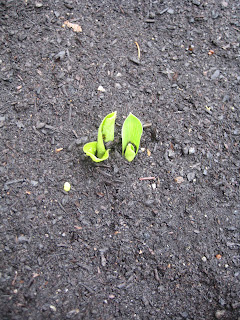 While I was working, I was literally watching spring emerge from the ground. Neither of these plants were visible on Monday and the fern was only just peaking out on Tuesday. Although this yard is much smaller than my last one - which is one reason why I sold it and moved - there is still enough space to decorate, make pretty every spring, and then simply enjoy sitting out in nature for the summer with strawberries. Last summer, I planted them in containers and then left them out all winter expecting they'd die only they are coming back. What a surprise. I wanted to move them to a new location but it wasn't ready last fall so hopefully I can save them now. 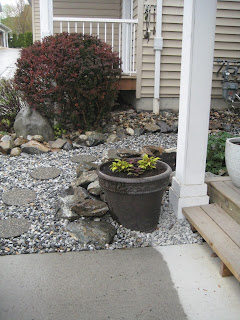 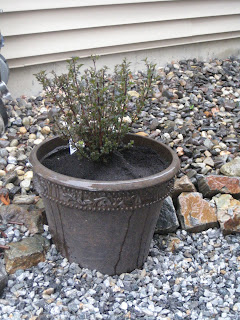 I wanted a little bit of colour in the front right now even though I usually wait until after the long weekend to get flowers. There are two kinds of coleus, one that is purple with lime veining and one that is lime with purple edging. I can't remember the name of the shrub and it's pouring rain right now so I'm not going out to read the label. It gets pink flowers, has a lovely dark green shade, is quite hardy, and should be able to winter in the pot in this protected area between the townhouses. 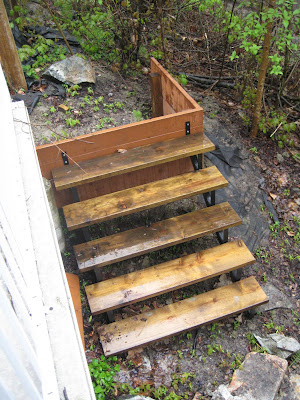 My contractor built these stairs last fall and they are MUCH safer than the previous one. I already had the risers left over from another project and wanted to use them so where they ended is where they ended and I'll figure out the landscaping from there. Sort of like the road we're on is the road we're on. This area is in the back with lots of shade trees and the sound of the creek which is super loud and rushing today with all the rain we're getting right now. A gorgeous sound. I'll be digging dirt from the bottom to fill the top while shifting the landscape and eventually the gravel will come to that upper edge.

I am intending to extend the deck considerably but won't remove the one that is there. I'll build over it extending toward the house and sideways. A wood deck would be lovely and I built seven at my last house so I definitely know how to do that but with the cost of supplies, I'm considering other options. Depending on what my research shows, and how big the area is once it's shaped, I may wait until there are less supply issues and the prices either stabilize or go down. Down would be nice. Stabilize is probably the best I can hope for. I'm watching by budget closely too. Running out of money might make the decision for me.

Yesterday, it rained all day, I'd hoped to get a lot done in the studio but apparently rain made for moving slow. I did some sewing, some writing, and a lot of lounging. This weekend, I'm working on the last assignment for the collage course with Jane Davies and - as I thought - this one is about mark making. I emailed her to ask if I could do the assignment in fabric and she recommended I do some in paper and some in fabric which should be fun although I definitely want to focus on the fabric so it'll be a couple in paper and more in fabric.

I have really enjoyed this workshop and Jane is a fabulous teacher. I've been following her work for quite a long time. Several of her books are on my keep shelf and have made multiple moves with me. This was the first time the date and the price worked out and being online made it completely doable. I'm glad I signed up and have enjoyed it so much I'd like to take an in-person workshop with her in the future although they haven't usually been within driving distance but hopefully.

Email ThisBlogThis!Share to TwitterShare to FacebookShare to Pinterest
Labels: Renovations