Considering the pandemic, it seems almost wrong to say that January has been an excellent start to this new year. Then again, the pandemic makes it necessary to be actively doing at home or risk going crazy so I'm glad to have been engaged and focused. That is definitely my intention for this year. 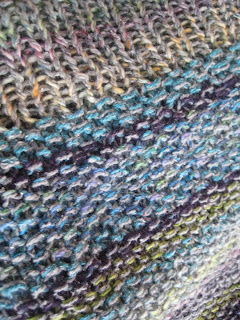 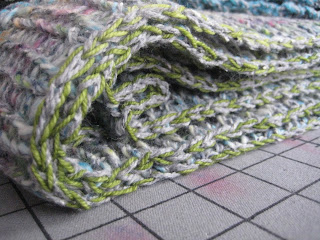 As I mentioned in The Buy Less Year, with slightly less storage space in my new studio, the stash is just a little too full and I'm actively sewing and knitting it down to a better level. This second remnant scarf started with the left over yarn from the one in that previous post - remnants of remnants - with a few added. 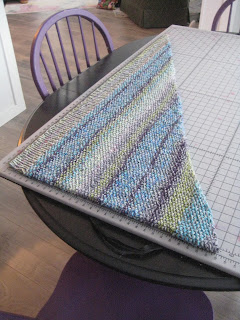 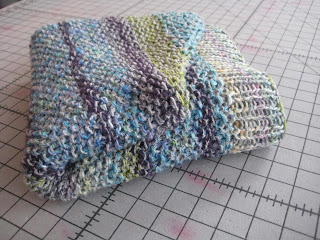 The scarf started with three stitches at the point and is knit mostly in seed stitch with one front/back increase at the beginning and end of each row and a ribbed top edge. The yarn is doubled with a light grey running through the entire scarf. I used the grey with lime for the cast off row to give it a pretty edge. This bluer shade of lime is my favourite.
I learned how to knit a version of this scarf from a friend years and years ago. Hers was in garter stitch but basically any stitch works using this point to top format with regular increases. It's become my go to project for mindless knitting.
The January Report - this month, I made my yearly what does the next year hold collage. I knit two scarves and started a third, all from remnants. I finished sewing together a turquoise cardigan and finished knitting, blocking, and sewing together a grey pullover. I sewed a McCall's 8001 blouse using a three fabric combination, finished two handbags, finished and discarded a third handbag, and made progress on my friend's quite late birthday gift. I have McCall's 7904 traced ready for alterations and I sewed padding and covers for five sleeve boards, four for gifts and one for myself.
I consider the amount of sewing I've done this month a major accomplishment especially since I've been working with my back-up machine, struggling not only with unfamiliarity but also with the lack of appropriate presser feet. One good outcome is that I've now ordered the feet I need and if I'm ever in this situation again, it won't be as difficult. This is good.
With the renovations and workmen in the house, I've done more knitting than usual. They - the renovations - are slowly winding to an end. Previously, there was a half wall in the hallway upstairs and it is finally being replaced with a railing that should be complete by the end of next week. Other than that, all that's left for the contractor is the vanity in the downstairs powder room and everything else is mine to do. It's all painting, mostly baseboards, trim, and doors and once those are done, the kitchen cabinets. I'm not "allowing" myself to do the cabinets until everything else is painted so I actually finish the other jobs rather than put them off. I did that at my last house and the railing never did get painted before I moved.
My plan is to finish everything but the cabinets before spring and then paint the doors outside in the garage. Before then, I intend to paint the garage or, at least one wall. According to my contractor if it's above freezing, I can paint although it'll take longer to dry. I'll paint the wall behind my metalworking bench which is the wall where I also want to create a photo area that is permanently set up. In January, I started a new blog dating back to December 1st as well as a new website. This month, I plan to work on my photography skills starting with a photo station. 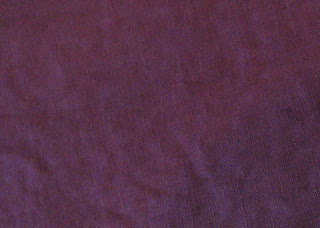 I mentioned earlier that I typically sew new clothing when travelling to workshops and with no workshops last year, I barely sewed anything. I have a minimalistic wardrobe and with no new additions, I'm not only bored with my clothes but my jewelry too. I've worn everything way too often. With still no travelling this year, I plan to sew for occasions... like Valentine's Day... and my birthday. The above fabric is the only one I bought in January. It's fuchsia linen to make something for my birthday in early June. 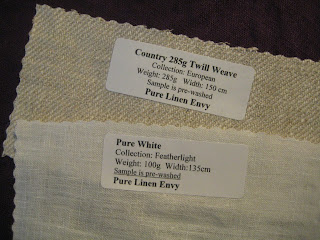 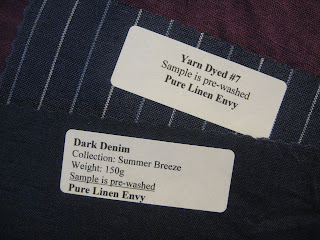 I ordered the linen from a Canadian company called Pure Linen Envy along with some samples of other fabrics I might be interested in. The prices are fabulous and I already knew the quality was excellent because my friend sent me two tea towels made from their linen as a house warming gift. 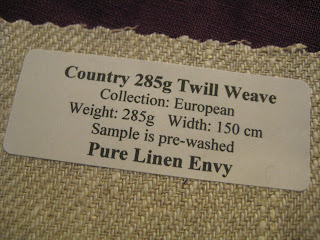 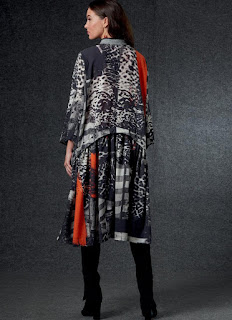 I am particularly interested in this twill weave. I already have some canvas fabrics that I think would be fabulous for this Vogue pattern - which very strangely I can't find on the site even though it's new - only the canvas would be too heavy for the gathered bottom back section. Since I'm planning to mix prints, I'm wondering about a lighter weight fabric for that area and since one of the fabrics is already over-dyed and I intend to over-dye the other one, I could throw this linen in as well and they'd all have a similar overtone. It's a thought. 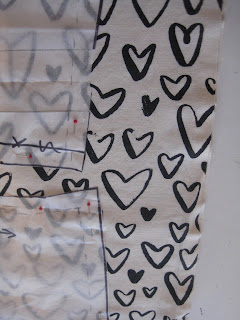 Here is a teaser image for my next post - heart pants for Valentine's.  The right edge is the selvage. To make best use of the remnants, I am careful with how I align the pattern pieces so that the resulting shapes are the most useful and so that I don't casually cut across an area I could have left larger. This is one of the canvas fabrics I want to over-dye. The other one has black polka-dots and is already over-dyed denim blue.

What did you make in January?