Saturday was the exhibit opening. It's amazing how you can be working and working toward something - a date, an event - and then suddenly it's here. I enjoyed working to the theme and creating the pieces and especially being part of the group of artists who contributed to this exhibit. The Salmon Arm Arts Centre was a delight to work with and did an excellent job putting it all together which always makes it so much easier for the artists. 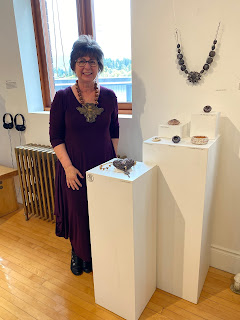 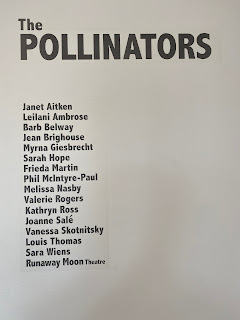 The opening was very well attended. In fact, it was strange to be in the same room with so many people, almost all wearing a mask as a courtesy to each other. The energy was wonderful. My friend came from out of town to attend the opening and took these pictures for me. She does a lot of photography which nicely lets me off the hook for capturing images. One piece is missing. Next time I'm near the gallery, I'll get a picture of it as well. 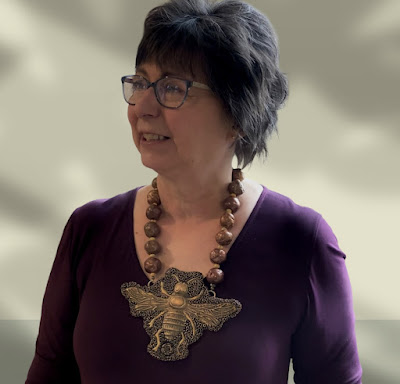 The dress I ended up wearing I sewed quite a few years ago for another opening and it rarely gets worn and so was sort of new. The necklace looked good with it. It certainly captured a lot of attention and people did indeed know who the jewelry artist was although it was hilarious when I was standing next to my pieces, talking to a friend about how I'd just finished the one I was wearing the day before and still had epoxy under my nails, and her dad who was sitting right there said you made that! Hmm... I am thinking he paid no attention to my pieces. 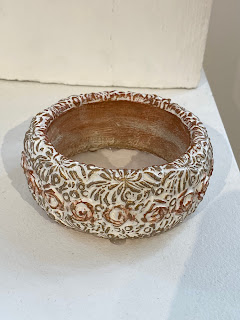 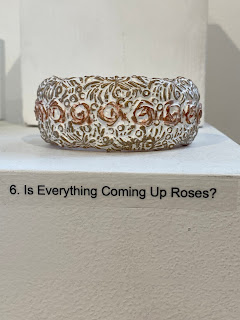 There were seven pieces in all. All but one were displayed on plinths and the other one was hung on the wall behind. The curator spent a lot of time figuring out she wanted to display them and this worked great. If you tried to pick one up, you'd find they were secured down. 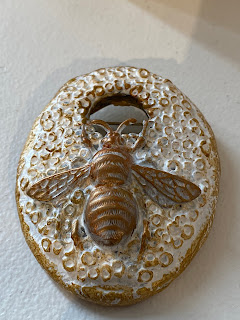 The piece I don't have a picture of is the other brooch. There were two brooches, one bracelet, two rings, and two necklaces. This brooch is called A Cameo Appearance. 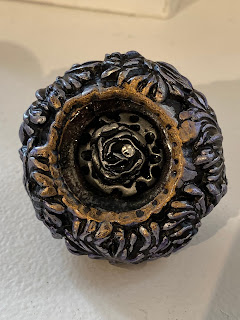 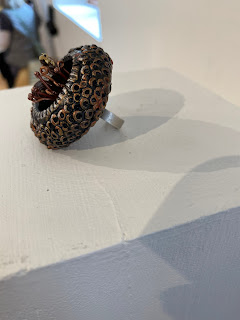 The pieces are all for sale except for the ring at left. I am keeping it for sure and - of course - whatever doesn't sell and I'll decide then what to do with them then. The ring I'm keeping is called Beyond The Bud and the other one is called Hey What's Going On In There. If you look into it, you'll see several bees. 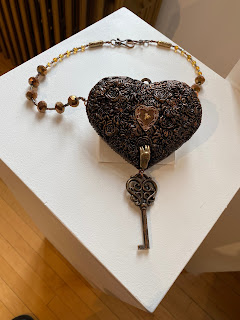 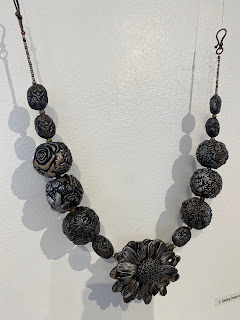 Necklaces - as you know - are my things, especially statement necklaces. I really enjoyed making both of these and focusing in on the tiny details and bringing it all together. The necklace at left is called At The Heart Of The Matter and the one at right is called Getting Down To Bee-siness. The name of the show is The Pollinators.

Email ThisBlogThis!Share to TwitterShare to FacebookShare to Pinterest
Labels: Jewelry